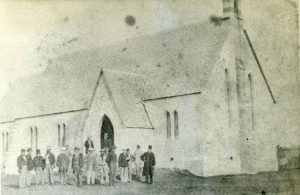 Have you wondered about Christ Church history?
Who built this beautiful church?
How old is it?

Christ Church Kiama had its origins on a site on the south east corner of Bong Bong and Manning Streets. In 1843 construction commenced and the first church was completed in the same year. It was designed to hold 125 people.
Kiama Parish was made a separate parish in 1850 and the then minister and congregation decided to erect a permanent building to replace the current wooden structure. A site was secured on what is now known as Church Point and in 1856 the building of Christ Church commenced, the foundation stone being laid on 17th June 1856. The building was made of blue metal rubble. The interior walls were plastered in imitation cut stone and after the building was completed the first heavy storm caused devastation necessitating plastering of the outside walls. So thorough was the plastering work that the foundation stone has never been seen since.
The Church was fully complete late 1858 and was opened and consecrated , free of debt, by Bishop Barker, Bishop of Sydney on 13th January 1859. The original building was minus the tower, ceiling and gallery and it contained not an organ but a harmonium imported from England.
The exact date of the erection of the gallery has not been verified, but apparently it was added not long after the building of the Church. Like the pews and other furnishings of the Church the gallery was built in cedar. The unique and beautiful cedar ceiling with its gracefully arched timbers was added in 1872. The unusual design has the appearance of the inverted hull of a ship, but there is no foundation to the story, so often repeated, that it was designed with this purpose in mind. A new pulpit and reading desk were also added at the time of the installation of the ceiling.
In 1859 when the Church was built the choir was located opposite the doorway. About ten years later they moved to the Gallery to accommodate more worshippers.
The Norfolk Island pines that now tower over the Church were planted in 1893.
The pipe organ, added in 1914, is a unique example of the work of Ernst Ladegast, son of a German organ builder. It is therefore of great historic value, as well as being a most suitable instrument for use in public worship.
In 1922 the erection of the Soldier’s Memorial Tower was commenced, its massive shape harmonising well with the design of the Church. The entrance porch is part of the
Tower and on its walls are sets of commemorative tablets.
Many additions and improvements have been made, some as memorials, some as gifts from individual parishioners or Committees attached to the Church. The Memorial Gates and Fence and their commemorative plaques were opened and dedicated by the late Archbishop Mowll on the 19th November 1949.
No record of Christ Church would be complete without mentioning the small burial ground which lies on the southern side of the Church. Over the years many people have wondered if the graves were there before the Church was built, or if they were moved there later from another site. Records show that five bodies have been interred in the Church yard at Kiama. Also an early plan of Kiama shows that burials had been made at two different spots, one just west of the Pilot’s House on Blowhole Point and the other near the present Anglican Church, where of course the bodies lie.
By the end of the 20th Century the Church had begun to show its age, needing major restoration and renovation work to preserve the intactness of the building. This work has commenced. During 2003-04 the worn asbestos shingles roof tiles and all associated roof flashings were replaced with special ceramic tiles and metal battens resistant to the extreme weather experienced so close to the sea at Kiama.
Painting of the inside and outside of the Church and attending to the peeling and erosion that had occurred in the rubble walls was also undertaken. A special paint, used on the Opera House, was used to seal the structure from the elements.

History of the White Church